OEM position statements that disapprove the use of salvage parts don’t take into account the impact this has on the circular economy.

Recently, another OEM came out with a position statement regarding replacement parts. The bit that really warrants concern is that this particular automaker “does not approve the use of salvage or aftermarket parts that are manufactured to the same specifications or tolerances,” referencing of course, to brand new, OEM or OEM certified parts.

From a recycling perspective, it leaves you scratching your head, particularly when referring to “salvage” parts. These so-called “salvage” parts that recyclers sell to collision shops are the very same parts that came on the vehicle as OEM from the factory, so how an automaker can make that claim boggles the mind, since they are in essence, saying that you should not use their own parts, simply because they are used instead of brand new.

What makes even less sense is position statements like this fly in the face of sustainability or so-called “green” initiatives that many automakers are trying to emphasize these days. Whether it’s focusing on the use of more recycled materials, sponsoring conservation projects, trying to keep waste out of landfills and reducing emissions, many OEMs are going to great lengths to paint themselves as eco-friendly. Then on the flipside, you have statements like this which when it comes down to it, are purely focused on making money selling new parts. It completely undermines the concept of the circular economy and has a negative impact on the wider automotive eco-system.

Automakers have emphasized the use of OEM parts for years and in some ways, there is a reason for this, namely combating the use of counterfeit or poor-quality aftermarket parts. But when you start throwing recycled parts into the mix and stressing that you only endorse brand new OEM approved parts from the dealer, it creates a number of problems.

Firstly, when it comes to collisions, insisting on only using new parts will result in more vehicles being written off as total losses, meaning there is less work for collision shops. Secondly, even if the vehicle is still considered repairable by the insurer, there are added costs and delays in obtaining the right parts to perform the repair. Also, for the consumer it adds additional problems because if their vehicle is written-off, they have to find a replacement, which costs them time and money as well.

Additionally, when you look at the current automotive marketplace, a bold statement from an OEM signifying to only use new, genuine parts could not be more poorly timed. Dealers are starved for inventory due to the semiconductor shortage and the demand for used vehicles on both sides of the border. Vehicles simply aren’t available and if a consumer’s car is written-off because salvage parts are not permitted to repair it, what chance does that person have of finding a suitable replacement vehicle in a reasonable timeframe? Also, given the supply chain disruptions facing the entire industry—including parts, the delays for new replacements can take weeks if not months in some cases, further impacting an individual’s mobility situation, as well as the ability for businesses within the wider automotive eco-system to actually make money. With many consumers still reluctant to use public transit, the use of a private vehicle whether new or old, is often their only option. There’s also the issue of an aging vehicle fleet to consider. In Canada, the average age of a vehicle in use is pushing 10 years, while down in the U.S. it is now closer to 12 years and let’s be realistic, how many insurers and collision shops are going to use brand new OEM parts on a 7-10 year old vehicle, that is, if they’re able to get them at all.

While savvy insurers and collision shops recognize that not all recycled parts are fit for re-use, there are many that are in good condition and perform just as well as new OEM part for a fraction of the cost which is particularly important for the growing number of older vehicles on our roads. If we are truly going to support long-term sustainability, not only from an environmental perspective but from an economic and industry one as well, OEMs, repairers, insurers, recyclers and other key stakeholders need to collaborate and put their own interests aside, because otherwise, they are doing disservice, both to themselves and the industry in which they operate. 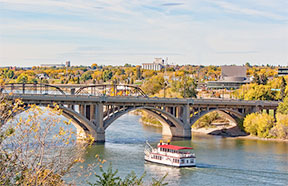